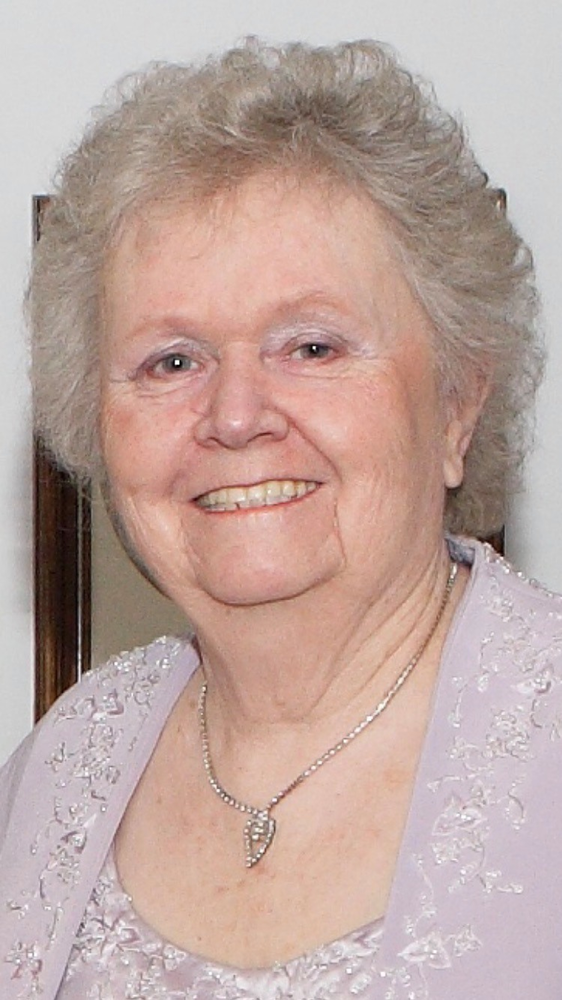 Please share a memory of Ruth to include in a keepsake book for family and friends.
View Tribute Book
Ruth Reid Geardino "Gaga" of Fords, NJ, passed away on Tuesday afternoon, November 24, 2020, at age 86, due to complications following heart surgery at RWJ University Hospital in New Brunswick, NJ. She attended Woodbridge Township schools and was a graduate of Woodbridge High School Class of 1952. Ruth worked in the meat department at National Grocery in Metuchen until 1957 when she married her sweetheart, Stanley Geardino, following a huge snowstorm on Groundhog Day, February 2, 1957. Originally her Grandpa Luke’s home, Ruth has lived in her home in Fords, NJ from an early age. Ruth and Stan purchased the home from her uncle shortly after their marriage and they still reside there today. Following her marriage, she became a full-time homemaker and mother, raising their five children. Ruth was a member of Our Lady of Peace Roman Catholic Church in Fords. She was very involved in the Our Lady of Peace School P.T.A. where all her children attended school. Later in her life she was the President of Ultimate Auto Service, a family owned gas and service station, until 1990. Following this, she worked in the distribution department of the Home News Tribune where Ruth won carrier of the year many times, retiring 2013 at the age 79, after 23 years of service. Ruth was known to all as the original “Gaga”, named so by her first Grandchild, Jillian, from her infancy. She had a generous, gentle soul and was loved by all that knew her. She dearly loved to laugh and would laugh so hard she would cry. By knowing Ruth, you could never feel alone because you always knew how much she loved and cherish you. Ruth dedicated her life to her family taking care of and managing care for her son Dino, her Uncle Vince and his wife Mary, her beloved Aunt Anna, and assisted her sister Blanche following her cancer diagnosis. She was also instrumental in caring for her small granddaughters until they began school. In her limited spare time, she enjoyed reading and loved to do crossword, word find, and jigsaw puzzles. She enjoyed watching old western movies and would start watching Christmas movies in July. Cooking was a way to show her love and holiday feasts were legendary in Ruth’s home with always enough food to feed a small army. Planning would begin as soon as the current holiday would end, and everyone could not wait to gather at her home again. Her double batch of stuffing was required at all holiday meals, regardless of whether a turkey was present. Summer picnics always included her stuffed cabbage, macaroni & shrimp, and potato salads. It was always a debate at birthday celebrations if her baked ziti, meatballs, or her lasagna would be chosen. Her grandchildren loved her cottage cheese & noodles, cabbage & noodles, and pierogies with onions. Her pistachio cake was always a very special treat. Ruth is survived by her beloved husband of 63 years Stanley Geardino; she was preceded in death by her parents, Mary Catherine Silanski, Thomas Nelson Reid, and Grandfather, Luke Silanski who raised her following her Mothers early death, along with her Aunt Anna Silanski-Malinowski; she is also predeceased by sisters Gloria Reid Mezey, Evelyn Reid Mendoker, Blanche Reid Kostu; Joan Reid and her brother Thomas, Jr; and her niece and goddaughter Robin Mezey. She is survived by her sisters, Rosemary “Rome” Reid (Bob) Lester, Joyce Reid, Nancy Reid (Paul) Nicholls, and Terry Reid. She is also survived by her children Dino Geardino, Dennis Geardino, Ruthe Geardino (Arthur) Dando, Marie Geardino (Bruce) Keller, Stanley Geardino, Jr. (Sherry); a special former daughter-in-law Tina Lander Gray;six granddaughters, one grandson, one grand son-in-law; two great grandsons and numerous cousins, nephews, and nieces; great and great-great nieces and nephews. Funeral arrangements by Mitruska Funeral Home, 531 New Brunswick a Fords, NJ. Visitation will be on Sunday, November 29, 2020 from 2:00–4:00 pm. All COVID protocols will be observed including limitations to occupancy, a covered portico is available outside for those who may want to visit longer. Funeral services will be at Mitruska Funeral Home at 11:00 am on Tuesday, December 1, 2020. Pallbearers are Arthur W Dando III, Thomas M Geardino, John Kostu, Luke Kostu,Darrian keller, and Dashael Keller. Graveside Catholic prayer services by Father Dario, of Our Lady of Peace Parish at noon at St. Stephens Cemetery, Keasbey, NJ. In lieu of flowers, memorial donations may be made to her favorite charity, St. Jude Children's Research Hospital, 501 St Jude Place, Memphis, TN 38105-1942, (www.stjude.org).
Sunday
29
November

Share Your Memory of
Ruth
Upload Your Memory View All Memories
Be the first to upload a memory!
Share A Memory
Plant a Tree